A walk around my garden - part 2

Weird section here.... I do have SOME agaves in pots.... I am trying to make our spaces functional, so that meant cleaning those pots on the ground.  I tend to like SMALL growing agaves (well ok, like might not be the right word, it's more that I have decided I really don't have room for many different LARGER varieties)

So this is one of our outside areas, the pots along the top of pool fence have 2L an hour drip reticulation.  At the height of summer they will probably get around 500ml dripped through each pot, twice a week. 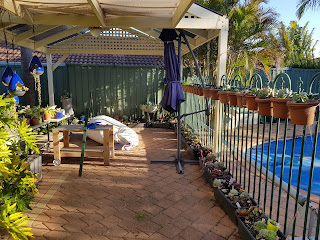 At the end - in one of the pots is Agave macrocantha 'Blue Ribbon'.

I managed a large import of very nice plants from Andoran Stud a number of years ago, I love Jocelyn's plants, but its fairly hit and miss as to what she has available - she doesn't grow TC, its all done by beheading/coring etc.  So there are never huge numbers of plants, and they are VERY sort after.  At the time I managed to grab 2 of the Blue Ribbons.  Still love these (just not their shin dagger spikes!!!)

this huge beastie came from a friend in Victoria, poor thing had to come over with all its roots chopped off, but its made a great comeback!
And another Jocelyn baby....
I have a few 'Lime Streaks', I was lucky enough to have a contact over East that could buy from wholesale over there, so for a fee, plants were picked up, cleaned, and we organised import permits into WA.  Still one of my favourite agaves.
This one, which I am assured is a potatorum, came from a friend over East while I was attending the Sydney Get Together in 2017.  She's growing well, and is quite a looker
'Fireball' - what can I say, I fell in love with this one when I saw it growing in Victoria in 2016.  Was lucky enough to be able to do a swap in NSW last year (at the cost of one Agave desmetiana 'Galactic Traveller' pup... and this one joined the family!

Agave V-R mediopicta, not an unusual one for WA, they ARE around, the colouring on this one is kind of a lime green, which is fairly common over here.    But hey it ticked off a wish list item!

I'm told this one is Rum Runner, but honestly I'm not completely sure. Either way, its not my favourite of the isthemensis variegates, new growth tends to be more green.  Keep looking for one I think is much nicer!

Another auction win from Hamiltons 😂
This one I was lucky enough to nab - its an indo import that has just gone through quarantine.  Gorgeous colours on it.
Picked this one up in my early years of collecting from a local WA seller.  Pretty sure its the same as 'Smoke' above.
Now this is the isthemensis that I REALLY love.  Look at that white!!!

When I first started ordering plants on permits, white rhino's were no where near as highly in demand as they are now.  At the time I think I paid $50 for my original plant (small but very health).  Since then she has grown a bit, and had a number of babies.  I'll be keeping a few of these I think as I want to make sure I have more plants coming along.
Another local pickup, developed some nice central variegation, its just not strong 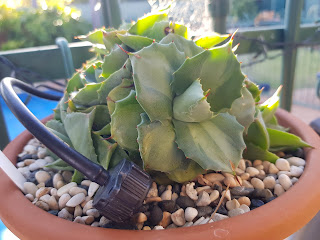 Remember that Andoran Stud order.... yep another one from Jocelyn
locally purchased Golden Princess... not that impressed with the colour on this one, still on the hunt for a better speciman.
This one came from Paul Forster in NSW.  Prolific little thing!
Andoran again...
Jocelyn again.... this cubic I nearly lost, as no roots when it came over, and it took 9 MONTHS before I finally got it going, now its growing like a weed!
This cutie came from a local sale, don't think that is the correct name [really - you're suprised ?]
Maybe 15cm across and not looking like getting any wider. 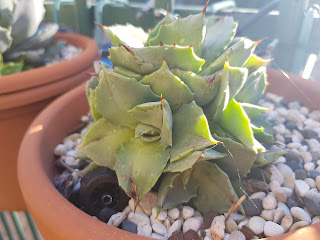 Hard to tell in this photo - but this one has white marginata variegation.  Still looking for a stronger variegatied version of this. 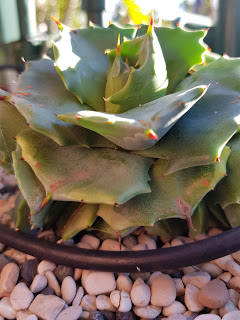 And that's about it for the agaves along this section.  Another day I will post about the other plants along here, but I only have so much time in a day.....